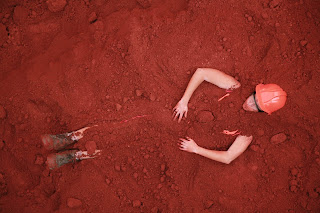 WITH high-profile artists and academics from Wits University's School of the Arts on the judging panel of the Brait-Everard Read Art Award, one is almost always guaranteed an exhibition that is a cerebral and visual turn-on. Previous winners such as Natasha Christopher and Alexandra Ross certainly didn't disappoint on either score. This year's exhibition of winner Anthea Moys may have been accompanied by her novel concept Fast Art Girls - a mobile truck selling take-away art - but it was not as readily likeable as her predecessors' offerings.

It is not that the ideas underpinning her work are clichéd; they just feel expected. She treads in the footsteps of a number of artists whose work has centred on the city of Joburg, without surpassing what they have done or offering any new insights. Nor is it unusual that her actual art, her performances which have taken place outside of the gallery, are not directly within viewers' grasp.

Much of the interactive and site-specific artistic projects in Joburg are only ever gleaned from documentation. In her favour, however, the photographs of her incursions into Joburg's no-go areas are more than banal records or by-products of her ephemeral practice; they are carefully construed art objects in their own right.

Mostly, the photographs are well taken and visually arresting, such as the images of Moys exploring a Gautrain construction site. In one, she is covered in the bright orange soil and in another she is seen standing looking vulnerable in between two giant machines. These images are obviously posed and Moys clearly is performing for the camera - with no audience present the camera is the only witness - thus her brand of performance art is intrinsically tethered to the photographic image. In her Nessum Dorma (None Shall Sleep Tonight, 2008) series in which Moys sleeps in a bed in Joubert Park, it is clear that the scene has been heavily styled with a pristine duvet, a book titled Don't Panic and petals that are strewn across the bed adding to its visual flavour.

The photographs are supplemented by video footage of her performances, but with the video-screen tucked behind a corner there was a sense that the photographs were the focus of the exhibition.

As the title of her exhibition designates, Moys's performance art is centred on placing herself in sticky situations in a city thought to be dangerous. But the perceived "risk" attached to each endeavour is underpinned by her racial, gender and economic status, establishing the idea that "danger" is socially and politically defined. The risk value, so to speak, of sleeping in the notorious Joubert Park, on the edge of Hillbrow, is directly attached to her status as an affluent white. Impoverished people sleep in this park daily without it being construed as a statement.

Moys re-enacts the same idea in Newtown and Alex, both destinations where many South Africans sleep comfortably at night - of course not in the open, but nonetheless in the titles of these artworks the emphasis is on location. The subtitles "Newtown vs the North" and "Alex vs Sandton" draw attention to the perceived discrepancies between the inner city/townships and affluent suburbia - differences that are racially and socially inscribed.

Moys's performances are driven by the concept of play, which she more or less implies is an act of transgression that takes place within the structures of society. Its pure Jacques Derrida (the French philosopher who contributed to post-modernist thought), but of course he posits that no endeavours could exist outside of established structures. There is an orchestrated contradiction embedded in her work because there is obviously no real risk involved in play. Games have no real consequences: they are casual dalliances that allow other realities to be explored superficially. Certainly Moys doesn't put herself at any real risk: she wears a hard hat and other protective gear when she visits a Gautrain building site and she employs guards to watch her while she sleeps in supposedly dangerous locations in the city. Putting herself at any real risk would contradict her notion of play - the consequences of the kind of play that she enacts is that, in playing within the structures, she brushes up against the confines of those structures.

Hence her art probes why it is that sleeping in Joubert Park is perceived as a mildly subversive or comical act. In this way she uncovers much of the irrationality that governs our society's concept of danger as well as the safety measures - security guards - employed to banish fear.

Of course, it is only the bourgeois who would perceive going to a boxing studio in Hillbrow to be a "game" or a "feat". But the irrefutable fact is that play can only ever happen outside of one's milieu - the moment one begins to enact a familiar situation within one's own context it summons another form of engagement. - published in The Sunday Independent, August 16, 2009.
Posted by Mary Corrigall at 11:52 PM