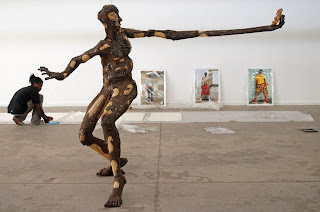 Staging a formidable African biennale has become the holy grail of the local art community. Since the country emerged from a cultural wilderness in the mid-90s, art organisations have set their sights on producing large-scale contemporary art events.

Their efforts, to date, have been marked by an inclination to represent the visual expression of the entire continent.

It is all part of a drive to shift not only entrenched views about African art but how the continent is perceived by the world.

Tired of being represented by the West, Africans are keen to assert their own concept of themselves, inscribing their own histories and packaging their own expression.

Ultimately, the wish is to create a large-scale art event to rival Documenta - an exhibition that takes place every five years in - or the Venice Biennales, thus shifting the art world centres to a more southerly geographical position. These impulses may be justified and necessary but, nevertheless, the ambition to stage such an event on the African continent has presented challenges of brobdingnagian proportions.

Cape Africa Platform, now staging the Cape 09 Biennale in , entered the fray in 2007 with 07, a watered down version of their initial vision. Financial woes were blamed for their failure to deliver on a promise to stage "'s first ever large-scale exhibition of contemporary African art". Nevertheless, securing funding for large-scale art events is one of many hurdles, especially since the visual arts are marginalised by African governments and its citizens.

There are also ideological challenges to navigate, such as the disadvantage of presenting African expression in a single package and, in the South African context, the assumption that South African art is indicative of art making from the entire continent. In other words, is it justifiable for South Africans to assume the voice of the continent?
Despite all these obstacles, many a South African art organisation has tirelessly pursued the dream of establishing a significant art event, often and, perhaps predictably, with disappointing results.

Cape Africa Platform initially billed their large-scale event the "biennale that is not a biennale" in the hope that they could sidestep the pitfalls that beset previous endeavours - or at least to create a bit of distance between their events and those from the past. The ghosts of past come in the form of the Johannesburg Biennales. Held in 1995 and 1997, the Johannesburg Biennales perhaps brought the dream of establishing grand African art events closest within grasp.

Coming after the country's first democratic elections these gargantuan expos were compelled by a desire to reconnect with an international art community after years of cultural isolation while simultaneously providing a platform to begin exploring a post-apartheid identity.

Though they were progressive and multi-tiered in their approach, they came under criticism from the international community who continue to see art making as an unnecessary indulgence on a continent that has yet to deal with more pressing issues such as poverty, violence and political turmoil.

In an Artnet review of the second Biennale Bisi Silva, a British-based critic, writes: "(the) Biennale was haunted by questions regarding the relevance of contemporary art to the real issues of life in Johannesburg, Cape Town and the surrounding townships.

"Despite the progress of recent years, the majority of South Africans are still disenfranchised, and receive negligible benefit from cultural events like this."

Such responses have had an impact on how South Africans configure not only art events but smaller art initiatives and awards, where an outreach programme has become the norm.

Certainly, Cape Africa Platform, from the beginning, have been adamant about "bringing the art to the people" by selecting venues for their event in townships - thus engaging with a new audience and demonstrating the relevance of art to the man in the street.

Such an approach seems vital in terms of drumming up financial support from non-governmental organisations and government agencies. It is said that a third Johannesburg Biennial never got off the ground because of a lack of support from the Johannesburg City Council and the Department of Arts and Culture.

Nevertheless, as much as Cape Africa Platform have endeavoured to make their art event relevant to "the people on the ground'' they have faced an upward struggle in terms of securing financial support for their ambitious endeavour.

Though they made appeals to a number of private donors, the organisation primarily relied on the National Lottery Distribution Fund (NLDF) for the bulk of their funding. When the NLDF failed to pay out money promised to the organisation, their dream for a large-scale art event started to slip beyond their grasp.

Many believe that Cape Africa Platform's vision was far too ambitious. Not only did the organisation hope to display the works of 48 artists from South Africa and the rest of the continent - many of whom were residing abroad - but they planned on showing the artworks at more than 20 venues around Cape Town.

This grand-scale art fiesta, dubbed TRANS CAPE, was expected to start in September 2006. But, a month prior to the event, the organisers announced it would be delayed until March 2007. Financial woes were blamed for the delay but soon after there was some reshuffling within the upper echelons of the organisation with Susan Glanville-Zini and Zane Ibrahim stepping down as CEO and director respectively. The implication was that the organisation's inability to stage the event on time could also be attributed to erroneous planning.

Mirjam Asmal-Dik was appointed the organisation's new chief executive officer but, even with her at the helm, the first biennale failed to live up to the expectations the organisation had set. When Cape 07 was eventually staged it was significantly smaller, showing at only seven venues around the city - instead of at 24 venues as originally envisaged.

Concerned that his integrity might be compromised, the biennale's curator, Gavin Jantjes, jumped ship. Unable to afford the shipping costs necessary to transport the bulk of the artworks from the 48 artists who were due to participate, Cape Africa Platform appealed to artists to attend the exhibition in person instead.

"We have asked them to try to bring their artworks with them in their suitcases and to keep an open mind,"said Asmal-Dik in an interview with The Sunday Independent at the time of the show.

The situation was desperate and, with participating artists eventually left to foot the bills for their flights and costs, many felt that the biennale should not have gone ahead.

It seemed as if the organisation was living up to its slogan - "the biennale that is not a biennale". Asmal-Dik was adamant that the event should be staged, in whatever form.

"We have to push it through. Private sponsors are watching us; they have made it clear to us that they want to see it happen if they are going to invest in it in the future," she told The Sunday Independent.

More recently, Artlogic's Ross Douglas has, too, been chasing this holy grail of art exhibitions, implying that the Joburg Art Fair could in some way function as an alternative to a biennale.

Like his predecessors Douglas, too, has hoped to create "a world-class" African event that will capture the attention of the international art community. Believing the art fairs to be a more economically sustainable event, Douglas implied they would have better staying power.

But with their commercial slant and superficial intellectual framing, Douglas's fairs don't measure up to the concept of a biennale. So while his ventures may be financially sustainable, they provide little intellectual nourishment, rendering the dream of a grand-scale art event ever more illusive.

Cape 09 could herald a new era. Cape Africa Platform have significantly reconsidered not only their initial vision but the form a biennale in South Africa should take. Though they have initiated discussions with other African art communities across the border in Maputo and Luanda through their Sessions programme, they are no longer looking to position the biennale as an affair that embraces expression from the entire continent.

"We are going to let our relationship with artists from other countries develop naturally and slowly," said Asmal-Dik.

This ideological shift has had positive practical spin-offs: instead of spending the bulk of their budget on flying in art from around the world and continent, they are able to channel it into initiatives that will have a tangible and sustained impact on South African society.

The Young Curators Programme is one such scheme, which aims to develop young curators. These young talents will also be involved in curating exhibitions for the biennale, thus creating events that will directly address the youth.

With the funding in place this time round - mostly from international donors - the organisation might well have a chance of succeeding.

Their victory might also be down to a shift in Cape Africa Platform's priorities: no longer are they looking to tailor-make an event designed to appeal to an international audience or to make a statement about Africa to the world - their emphasis is on the youth.

"Our objective now is to create a new generation of artists and curators. It's all about the youth, showing them that art can be a part of their lives," said Asmal-Dik. - published in The Sunday Independent, May 24, 2009

Posted by Mary Corrigall at 1:40 AM