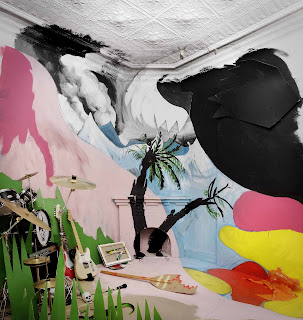 Zander Blom is scornful of the dated imperative to create art that is new, original. It’s a theme that underpinned his last solo exhibition, The Drain Of Progress, which mapped a journey to rediscover or relive pivotal moments in the modernist movement when new visual idioms were created.With this exhibition, he is caught up in a similar trajectory, however, this time it is the physical and psychological journey towards unearthing a new visual syntax that forms the focus.It’s the voyage of the European Primitivist who believes that the key to unlocking the inner creative voice requires reconnecting with a primitive society that is unfettered or untainted by the evils of the civilised world.This brings to mind the likes of Pablo Picasso and his contemporaries, but the actual physical journey that Blom recreates more closely mirrors the life story of Paul Gauguin, the French artist who turned his back on a profitable career as a stockbroker and on “civilisation”, resettling in exotic locales such as Tahiti and Polynesia, where he created his iconic oeuvre.

It’s probably the last and final scene of the narrative, where the central protagonist is said to have died from syphillis – among a host of other diseases – which recalls the figure of Gauguin and his own bitter demise in so-called paradise. But ultimately Blom is alluding to a mindset.What Blom presents is a caricature of the voyage of self discovery, which is compelled by this belief that in a different environment the authentic creative self manifests.But this is not a conventional parody; while Blom documents the experience of an individual, there is no individual present in his works. His photographs simply feature a collection of musical instruments that are placed in front of changing backdrops that conjure stylised island settings.In this way Blom not only alludes to a Primitivist compulsion but to a narrative that is deeply embedded in contemporary society: the story of the wannabe rock band and their search for fame and fortune. It’s as if the frameworks of two narratives from different epochs have been thoughtfully overlaid to form a postmodern palimpsest.

Naturally the journey that an aspirant rock band would follow would be a journey in the opposite direction to the primitivist, moving from the periphery to the centre, the locus of civilisation where they would bide their time while waiting to be discovered by some head honcho in the music industry.This makes the parallel between the two feel contrived, but it is the friction between these two motifs that enables Blom to destabilise the crucial elements that delineates them. The quintessential tale of the great artist – genius is inextricably centred on elevating the stature of the individual, casting him (it’s mostly a him) as the avatar of creativity and inventiveness.However, by removing the individual from the narrative and employing musical instruments alluding to a band, a creative collective, the tale is not subverted but distorted.Similarly the narrative of the wannabe rock band cannot be realised if it is played out on an isolated island peopled by supposed primitives.At their core, though, the aspiring musicians and artist-genius are both connected to the cult of celebrity and the desire to startle the world with their curious reinventions. Blom’s art suggests that this is a false ambition. He achieves this by displaying the narrative like an amateurish theatrical stage set with rudimentary visual cues, referring to a constructed reality.Furthermore, each of these candy- coloured mise-en-scènes are painted on the walls of a room; in other words, the journey is imagined. For many early modernist painters the journey into the culture of the other was just that – an invented intellectual expedition accelerated by contact with art objects of the other. For those like Gauguin who actually made the physical journey, his bitter denouement serves as a caveat: immersing oneself in the culture of the other comes with the risk of being infected by their supposed primitive sexual excesses.Employing bright, trendy colours and stylised motifs Blom has created a sort of pop version of the artist-genius narrative and in so doing he not only expresses its triteness but he undercuts the core values of high art.He also reflects on a contemporary society where everyone has been enabled through the proliferation of digital media and reality TV to envision themselves as the inventive, artistic hero.The irony is, however, that while Blom tackles clichéd themes, his approach is actually fresh.He has, after all, recast painting as a temporary art product that only survives in the form of a photograph. It’s a clever twist.The cynicism that infused Drain of Progress is still present albeit couched in satire.One can’t help feeling that this exhibition isn’t as visually or intellectually sophisticated as his first solo, but given that Blom’s goals with this exhibition differ, it is not unexpected. One only wishes that his photographs were larger, relaying the overall impact of his paintings more faithfully. Nevertheless this exhibition confirms that Blom is one of the most promising talents on the South African art scene.