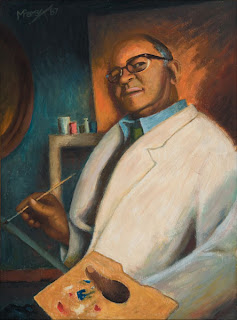 From Pieter Hugo's penetrating and clinical brand of photography, to Nandipha Mntambo's animal skin and hoof sculpture, to Zanele Muholi's unsettling photography that ventures to reveal what few deign to see, this group exhibition encompasses a diverse range and modes of expression, which all articulate the Self/Not-Self theme in interesting and unexpected ways.

However, it is not Muholi's graphic photos of a woman having her period that creates waves; it is the George Pemba Self Portrait (1987) that creates a frisson of excitement. Placing this dated painting in the context of a cutting-edge group show frees Pemba's art from the limited curatorial discourses that have framed his art for decades.

Pemba's art and that of his generation of artists - dubbed "the pioneers" for their annexation of conventional western art-making techniques - have, until recently, always been exhibited under the rubric of "black modern painters".

In fact, even as recently as last year at Joburg's inaugural art fair, Pemba's art was displayed under this narrow tag in the curated show Take Your Road & Travel Along: The Advent of the Black Modern Painter. Since 1985, when Ricky Burnett staged Tributaries, there have been a number of well-intended efforts to elevate the art of marginalised artists.

However, more often than not, their art is never viewed on its own terms but rather in the context of a "neglected other". In this exhibition, which mostly consists of contemporary art, the Pemba portrait is viewed independently from black modern art, permitting one to view it as a product of Pemba the artist rather than an artefact of a historical period.

Of course, juxtaposed with contemporary artworks, Pemba's portrait becomes emblematic of an outmoded art-making ethos, especially in terms of self-portraiture. Back in Pemba's time self-portraiture was not a point of entry into discourses on difference, race, gender and authorship as it is in the postmodern world.

For artists of Pemba's period the genre was employed to assert the persona of the artist, allowing the artist's psychological ticks to be probed. During the modernist period there was more curiosity about the personality of the artist, and self-portraiture allowed this interest to manifest in an obvious manner.

One senses Pemba is also interested in the formal challenge; capturing his likeness in an inventive way. Certainly not many self-portraits show the artist at work as Pemba's does. Here Pemba is a live subject, which enables him to critically observe himself in the act of painting. Not only does he reflect on his "seeing" eye, but the aspect of himself that comes to life during the painting process.

In contrast to Pemba's expressive representation of himself is Tracy Payne's and Pieter Hugo's very life-like and dry renderings of themselves. Payne's image appears more like a commercial art product than a fine art one, which was no doubt her intention.

The self-portraiture genre is, after all, an overused and trite genus of art.

Payne's artwork underscores this reality while suggesting that it doesn't offer any insight into the subject, that it functions as an empty illusion of self. As such one doesn't feel as if Payne is personally invested in her portrait. Her features are there but she is absent.

Hugo, whose work has always been dogged by the politics of representation, is liberated from that debate by assuming both the author and subject roles. Nevertheless, in his triptych his likeness doesn't appear to be safe from manipulation; his hair and ears take on a slightly different appearance in each photograph. Digital photography has undoubtedly destabilised the notion that photography truthfully records and Hugo exploits this fact, leaving his viewers wondering which Hugo is authentic.

For women, representing the self can often be a politically loaded act.

Berni Searle denies her presence in her series Once Removed (2008) by covering her face with a white cloth. Withdrawing or removing herself from the process is empowering while at the same time indicative of the way women are viewed by society as vacant vessels without a character of their own.

Muholi also obscures the identity of her subject by cropping out her face. Nevertheless the viewer shares a rare intimacy; a woman having her period. Blood is seen running from her naked body into a bath. In this way her subject is governed by her biological or physical self.

Lerato Shadi's performance, Fragile, on opening night, added another dimension to the exhibition. Covering herself in masking tape Shadi looked like a bandaged patient undergoing a painful physical alteration - a dramatic transformation of self. Her performance also read like a denial of self; in covering almost every iota of her body in the beige tape she almost erased her physical presence.

As Shadi tried to fight her way out from the sticky mess enveloped around her body, it became clear that the act of reclaiming the self is a painful process. - Published in The Sunday Independent, March 08, 2009
Posted by Mary Corrigall at 5:04 AM