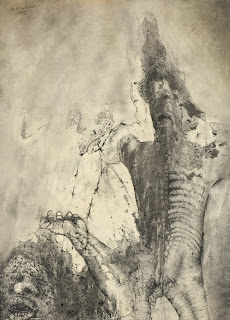 During the past few years the Johannesburg Art Gallery has focused attention on black artists who were sidelined, staging large retrospectives of the likes of Dumile Feni and, more recently, Kay Hassan.

Although this exhibition is obviously an extension of that programme, the curators’ desire to elevate the art of Thami Mnyele has been so crudely executed that it forces you to question the methods entailed in rewriting or reclaiming history.

Mnyele and the cultural collective he was allied to, the Medu Art Ensemble, played a role in the anti-apartheid struggle movement, which means that this exhibition has undeniable historical and political value. This is not disputed. But should Mnyele, or any artist for that matter, be immortalised and mythologised to the extent that the curators of this exhibition have done?

Interestingly, Mnyele’s art is not at the centre of this exhibition, which is a pity considering the visual impact of his work. Instead, the curators have located his oeuvre in a political rather than an art narrative. As a result they unwittingly suggest his output and that of the collective has little significance in the realm of art. His oeuvre looks rather small. Perhaps that is why the curators were forced to construct elements around the art to give the exhibition weight. As a result the exhibition is like a conventional historical museum display with the concomitant clutter of memorabilia that are employed in myth making.

Art institutions are also powerful purveyors of history and have been known to cast artists as heroes, but their approach is usually less conspicuous, allowing the art to do the talking.

The curators (who are nameless) of this exhibition have gone to extreme lengths to canonise Mnyele. In one room, the central attraction is a glass box containing a branch of a thorn bush said to have pierced Mnyele’s skin during the raid on the Medu Art Ensemble (a Botswana-based cultural-political organisation) by the South African Defence Force in 1985, in which Mnyele died.

His death was undoubtedly tragic, but the display is a crude attempt at sanctifying him.

Admittedly, I studied the branch with wonder. But it wasn’t that I wanted to spot Mnyele’s dried blood – I was just curious to understand the conditions that have allowed such a display to make it into a modern liberal art institution, which has proved to be fairly cutting-edge over the past few years. An exhibition such as this propels you, kicking and screaming, back to a time when religious institutions were charged with creating mystique around people who were supposed to possess special powers.

The canonisation of Mnyele begins with a display of photographs of him and video footage of interviews with family members. In other words, the exhibition proceeds with the assumption that Mnyele is a hero and suggests that this status has been conferred on him because of his commitment to the struggle and not necessarily because of his art.

There are newspaper cut-outs documenting a landmark exhibition, It’s a New Day, held by Mnyele in Dube, Soweto. This does contextualise Mnyele’
s motivation and his contribution to what was then termed “black art”.
He clearly had an impact on art in the townships and encouraged artists to produce work that wasn’t solely for a white audience.

Some of the work from that exhibition are on display but they are not visually startling. Politics and art do not always make good bedfellows.

One of the sculptures alludes to modernism but it is an uncomfortable fit in the context of a politically charged exhibition. After all, modernism placed form above function, which is no doubt why resistance artists largely avoided abstraction. Artists of the struggle era traded in an expressionistic form of representational art. But in so doing their art was incredibly limited, conservative even. Social art with political change as its main objective isn’t able to further art’s own goals.

Mnyele’s art might not have been progressive but it is visually striking and superbly executed. His mixed-media drawings are poignant evocations of the human degradation apartheid laws forced on black South Africans.
Mnyele’s figures are battered out of shape, immersed in dirt; or have been atomised, summoning the abstract psychological horror and inhumanity of a brutal social system.

In pieces such as And the River was Dark and Alex and River Underground, he shows two parallel worlds coexisting. Above ground, a quaint and tranquil village is depicted. Deep below the surface is a dangerous, dark and dirty world, which leaves its marks on its inhabitants. The thick roots that snake through this realm encircle their bodies, holding them captive in this murky dysfunctional realm.

Mnyele’s resistance art is striking in that his mode of expression – a quasi-fantasy illustrative style – is unlike most resistance art. His work certainly doesn’t follow that characteristic Rorke’s Drift brand of resistance art, even though he did attend that famous institution.

It seems a pity, therefore, that he didn’t pursue his own unique style of art while at the Medu Art Ensemble, where he was put to work churning out political posters.

There is an extensive collection of these posters on exhibit but, frankly, not even graphic designers would be impressed. They may be bold but their design is rudimentary, which is to be expected, given the posters’ intended function.

With a profusion of gun motifs, these posters normalise violence and, although this gives viewers some insight into the ethos of that era, their significance is rooted in the fact that they mark a period of South African history. As such they should be displayed in a museum where viewers would not be trying to assess their artistic value.

Mnyele’s talent was squandered on creating commercial products and, considering how the new South African government has betrayed artists, you can’t help but wonder whether the sacrifices so many made were worth it.

If Mnyele had lived, it is doubtful he would have been hailed as a hero; more than likely he would be settled overseas where he could have had better access to funds to pursue his art.
Posted by Mary Corrigall at 4:37 AM