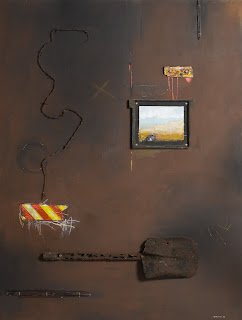 There is no obvious human presence in much of Mautloa’s art at this exhibition. As the title of the exhibition suggests, it conjures the attendance of an insidious and unknowable entity that has corrupted everyday objects, forcing them to betray their function. In this way he inadvertently summons an environment governed by a noxious force that is powerful enough to permeate solid inanimate objects, steadily eating away at their structure until presumably nothing is left. His preoccupation with discarded objects brings to mind Kay Hassan’s recent exhibition Urbanation, which depicts enormous piles of disused items. Hassan and Mautloa are clearly, interested the parallel societies that exist in this country; those that carelessly consume and discard objects, and the community that survive on this disused detritus. Though there is a socio-political undertone to Mautloa’s art he also summons more universal themes such as the transcendental nature of objects and our ability to imbue objects with new meanings. This is why he has chosen to present objects at the end of their lifecycle; when they can no longer fulfil the purpose for which they were designed. For it is at this point that an object’s abstract possibilities can be realised.

Aside from a frying pan and a violin case, most of the discarded items that Mautloa combines in his artworks are tools of labour with the spade being a reoccurring motif. He doesn’t summon quotidian representations of the spade; keen to convey the coarse personality or character of this pedestrian object he employs actual spades. Much of these items are unnaturally worn and disintegrated. Presumably the artist has worked at degrading the objects. This is because Mautloa is interested in the effects an environment has on objects over time and their life-cycle. In some cases the spades that Mautloa presents in his art are so disintegrated they have almost ceased being spades. The wryly titled, Spade (2008) is so degraded by rust that it could no longer function as a spade. This spade is embedded within the confines of a mixed media painting that contains other worn objects, suggesting that it is not just the spade that has been degraded by this environment but any material that exists in the environs. In this way Mautloa indirectly conjures up the milieu from which these objects are derived. It is within this harsh locale that such a robust object like a spade, which is designed to infringe upon nature and battle the elements, is destroyed - albeit gradually. If this is the fate of the inanimate objects what of the delicate living beings who also inhabit this destination, who are more susceptible to natural conditions? Mautloa’s art suggests that the denizens of this tough environment have learned to adapt. This is especially evidenced in the sculptures, which show how different disused objects have been fused into new entities with quite a different function. Works Sculpture 3 (2008) for instance sees a rake fused with other steel objects to create an item that rises above its purpose to become an object of beauty. Portrait (2008) sees a frying pan, bolt and fork simulate the features of a human face. (2008) consists of one large bicycle wheel conjoined to a smaller wheel with the aid of a leather strap. Here disused objects are inculcated with a metaphorical function that reflects human endeavours. This renders insignificant objects momentous. Ordinary tools of labour become prized objects of beauty. It is an empowering process, whereby objects lose their objective purpose, becoming a vehicle for subjective expression.

Mautloa’s work demonstrates a curiosity about the status of an object once it no longer fulfils its function. This is partly driven by a philosophical quest that questions the process of invention. It is also motivated by Mautloa’s interest in the nature and conditions under which “renewal” takes place. Both of these issues are of particular concern to the South African artist; not just the process of creativity but the movement towards social and moral renewal that has dominated the post-apartheid era.

My Art Story (2008) which features an empty violin case, a painted surface covered by graffiti, alluding to a history of protest, and a makeshift art-making tool, fashioned from three different objects, speaks of the poverty, and compromises that survival demands but also of the way in which disparate entities have been forged together to engender functionality. In this way the dysfunctional objects with no purpose become valuable functional tools of creation.

The quality of the artworks at this exhibition is not always consistent, Round and About the City is a trite artwork presenting a montage of Joburg that looks like it was designed to appeal to a conservative corporate collector. Mautloa’s mixed media portraits also fail to enthral. However, this does not distract from this exhibition’s value and the magnificence of paintings such as Looking Back.

Posted by Mary Corrigall at 6:31 AM No comments: 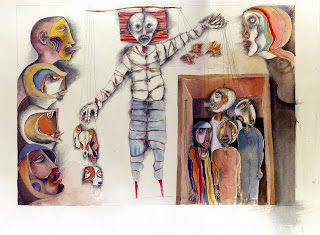 With Pippa Skotnes curating this exhibition, there was never any chance that it would be a run-of-the-mill showing of Cecil Skotnes's art. It's not just that, as his daughter, she has a more intimate relationship with his work, but she is known for pushing the envelope in her approach to curating. However, she has managed to create a novel exhibition that seeks to challenge the myth-making that surrounds artists of Cecil's calibre.

Charged with influencing and shaping the careers of many of South Africa's top black artists such as Sydney Kumalo, Ezrom Legae and Durant Sihali during his years at the helm of the Polly Street Art Centre during the apartheid era, Cecil's status in the local art scene has been high. His own oeuvre, with its characteristic melding of African and modernist aesthetics, has also secured him an iconic standing in South African art history.

But these are all defining qualities of his public persona. With this exhibition, Pippa and Thomas Cartwright, her co-curator from the University of Cape Town's Centre for Curating the Archive, are intent on bringing Cecil's private and seldom-seen character into focus. This is driven by a desire to demystify the artist, posits a pamphlet.

To achieve this end, all kinds of memorabilia and personal objects are displayed with artworks that have not been seen in public. Dirty paintbrushes, palettes crusted thick with the colours of the rainbow and knick-knacks from Cecil's studio are presented in one glass cabinet while another houses his collection of bow ties and a number of empty wine bottles bearing labels designed by the artist.

The glass cabinets that exhibit this quirky assortment of memorabilia conjure up more of a museum-like approach to presentation, positing these ordinary objects as valuable and collectable items.

This seems at odds with the curators' objective of bringing Cecil down from his pedestal. The disused wine bottles or bow ties are deemed to be of value only because they belong to Cecil. So although we have a window into Cecil's intimate world, learning that he collects bow ties or that he has a watercolour that he painted for his wife hanging in his studio, the value of these ordinary objects is rooted in his status as a "genius artist".

Perhaps this contradiction can be attributed to the familial connection Pippa shares with him. Like most daughters, she is able to maintain two seemingly incongruous images of her father; while she knows him to be a flawed and everyday person, she simultaneously views him as a master of his craft. This is all conjecture, however.

This exhibition also has another curious feature. Across one wall is a giant collage of photographs (taken by Paul Weinberg) of Cecil's home. They are not documentary-style photographs, rather they appear like highly styled images that depict particular features of a room, such as the ornamentation on a wall or on a coffee table. They do make for a pleasing montage, but mostly they do not foster any intimacy with the artist.

A photograph of his bookshelf and one of Cecil staring out from his sunny balcony does give one a glimpse into his habits but the others parade a fashionable faade that wouldn't look amiss in a glossy decor magazine.

Cecil's ornaments all exude an African vibe, which are not unexpected or revealing; they are quite consistent with the strong African flavour that characterises his art.

This does suggest that his appropriation of African forms wasn't a passing phase or part of a superficial connection to a culture motivated by a desire to forge a new idiom.

And, as such, Cecil certainly didn't conceal his work's link to an African visual syntax. The collection of artworks on this exhibition shows him to be most fascinated and inspired by the configuration of the African mask.

He is obviously interested in the mask's formal qualities but he also seems concerned with its ideological significance. In a watercolour drawing from the 1980s (few of the works are titled), he shows a puppeteer controlling a number of masks that cover the faces of a group of people. The puppeteer doesn't wear a mask, allowing his grotesque features to be viewed but, with two wooden legs, it is suggested that he is also reliant on artificial appendages.

One can't help thinking that Cecil was undermining Western perceptions of African objects, especially the African mask which, with its distorted and supposedly terrifying features, was perceived to be the avatar of primitiveness.

Cecil doesn't seem to view the mask as a device to conceal. His appropriation of its form, with the large colour-blocked composition, is able to reveal the layers that lie beneath the human skin. In Pale Prisoners (1975) in which the human form is portrayed as a series of interlocking bands of colour, it's as if the artist has pulled back the skin, exposing the body's inner workings.

The extensive collection of letters, which have been laminated and can be handled instead of being shown inside a glass cabinet, do allow one an insider's view into Cecil's world.

One handwritten letter by him gives us a glimpse into how he perceived himself. He undermines his role in the careers of black artists when he writes: "Whatever achievements have been registered by the black artists are monuments to their natural ability and their desire to create art in the face of the most astonishing difficulties."

· Cecil Skotnes: A Private View is showing at the Standard Bank Gallery in Johannesburg until September 6

Posted by Mary Corrigall at 6:18 AM No comments: