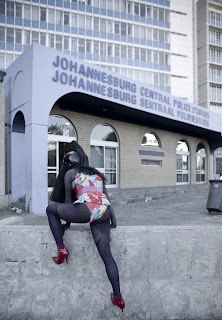 The plurality of expression that the post-modern era has facilitated has more than just expanded definitions of art it has ushered creators from other disciplines into this once exclusive art realm. Though photojournalists and crafters have made the deepest inroads into the art world, architects, filmmakers, sound designers and fashion designers have also shifted their creative focus into this lofty terrain. The transition from a commercial or media bound realm into the complex territory of art is not always smooth. So many of these would-be artists are like bulls in a china shop; without any comprehensive understanding of the nuances of the new visual language they have assumed, they clumsily move-about, tripping over the concepts they propagate. Athi-Patra Ruga is not cut from this cloth. He may be a fashion designer, but his appropriation of the language of art has been surprisingly swift and adept. And this exhibition, his second solo, cements his status as a (rising) artist.

Of course, his fascination and interest in dress, clothing or exterior appearances persists. His first solo at the Michael Stevenson gallery last year still saw him employing clothing as his medium of expression – albeit unconventional garments imbued with metaphorical significance. This exhibition reveals a new confidence; he has dispensed with clothing as a creative vehicle and focussed his attention on the nature of image-making, which as a facet of fashion, he is equally comfortable interrogating. Of course, this does mean he is assuming more conventional contemporary art mediums – video and photography – but certainly these tools offer Ruga a more sophisticated and complex mechanisms through which to explore themes of identity, race and gender. Dealing with all three of these popular motifs is like scoring a trifecta in the art world but Ruga does put his own spin on these issues in such a manner that suggests that he is not necessarily a disciple of convention.

In fact he has made it his business to rock the establishment and the social mores it promulgates. He doesn’t achieve his objective via subversion or derision rather he enacts his incursions on the systems he wishes to destabilise. Naturally he employs clothing or inappropriate clothing and accessories to establish his rebellious intentions. In …after he left (this is the title all small case), a video artwork, Ruga is seen strutting around in fishnet stockings, red high heels and a leotard - the stereotypical garb of a prostitute. Such a get up is sexually provocative and would normally raise a few eyebrows, but worn by a man it presents an even more disturbing scenario. But it is not just the act of dressing that creates friction it is the contexts that Ruga “tests-out” this persona; wearing a lampshade over his head he parades in this daring outfit at a taxi rank, a church and outside a police station (ex John Vorster Square). These locales all represent the cornerstone of the establishment – law and religion. Taxi ranks seem to be governed by a conservative patriarchal authority, as was evidenced in the attacks on young women wearing mini-skirts, and so it too has become a site where moral attitudes are enforced and, in this instance, contested. Because there are people milling about at the taxi rank, Ruga’s presence creates visible friction, whereas when he scales the wall outside a police station (as seen in … the naivety of Beiruth series) there are no witnesses and his incursion upon this space and the ideologies it represents is a silent invasion or rebellion. While this brand of performance does recall Steven Cohen’s irreverent performance art, Ruga isn’t dependent on an audience to achieve his objective; the photographs and video function as evidence of his “intrusions”. Ruga, the artist, also distances himself from the performance by not only dressing up in garb that conceals his identity but in assuming a character, Beiruth (derived from the Lebanese capital, ). Beiruth is an ambiguous persona; it is hard to identify the gender of this character and, aside from the allusions to prostitution, she/he isn’t a recognisable caricature or archetype. This is in part achieved by the black headpiece that Beiruth wears, which is a bizarre confluence between a burqa and a military helmet. Therefore, Beiruth does not represent a particular faction of society bur rather a particular aspect of the human condition. The push-pull between revealing and concealing, the masculine and the feminine, which are embodied in the conflicted nature of the Beiruth’s costume, is the focus of an external battle, between society and the individual and within the individual’s psyche too. So just as the viewer tries to pinpoint Beiruth’as gender and identity, so too does Beiruth move between revealing and concealing who he/she is.

After he left and the Naivety of Beiruth series are certainly the most intriguing and challenging artworks of this exhibition and most revealing of the growth and development of this young talent. His collection of embroidered cloths, which couch dark themes of race, rejection and sexuality within upbeat stylised imagery are also visually and intellectually satisfying.


Posted by Mary Corrigall at 8:16 AM No comments: