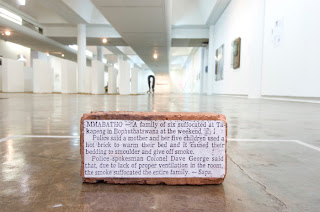 There are only a handful of bona fide art curators in South Africa; that is, practitioners who view curating as a specialised skill and not as an adjunct activity to art making. Clive Kellner is one the most capable of this ilk and the Johannesburg Art Gallery’s (JAG’s) latest exhibition, The Dematerialisation of the Art Object, is evidence of his talent for curating a collection of artworks within the budget constraints of an under-funded public art institution. One can’t help wondering what the JAG’s fate will be when Kellner leaves his post at the end of this year. No one seems to know where Kellner will be going or why he is leaving. But perhaps this exhibition is indicative of Kellner’s eagerness to dispense with the administrative preoccupations of his work, which must steal valuable time and attention from his love of curating.
Juxtaposing artworks from some of the most influential players in the modern and postmodern art movements, such as Andy Warhol and Fernand Leger, with contemporary artworks from this country, Kellner probes the disintegration of the traditional art object.
And ever faithful to JAG’s mandate to educate the public, Kellner has a broad audience in mind. Many people with little or no understanding of art experience a mind block when it comes to conceptual art. Without a recognisable or conventional art object at which to direct their attention, they feel at sea. A brand of art that favours ideas over form has therefore not really proved to be a crowdpleaser.
Cognisant of this, Kellner has designed an exhibition that visually and practically – through the use of texts – demonstrates how and why the “dematerialisation” of the art object occurred and, more importantly, what impact this has had on South African art. South African contemporary
art is most commonly viewed and studied in isolation from international trends – a consequence of political seclusion. But Kellner creates a vital link between the roots of conceptual art and the
present-day South African expression in such a way that homegrown art is posited within a global context and not as a product of parochial concerns or a flimsy derivative of Western trends.
Had Kellner hung South African art from the same timeframe as the majority of international pieces (mostly dated from the 1940s to 1980s) he would have created a dialogue that sought to insert South African expression into the grand narrative of modernism. Instead, he proceeds as though South African art has already claimed a legitimate status in art history.
Though the exhibition encompasses the various streams of modernism, Kellner’s attention seems more intent on forging a link between the instigators of conceptual art and the work of South African conceptual artists, such as Kendell Geers and Willem Boshoff.
This contexualises their oeuvres within the wider conceptual art movement, overriding the notion that their work is conceived within a vacuum.The almost circular layout of the exhibition is such that one commences and concludes with examples of oshoff ’s works, a journey which, hopefully, will end with viewers being able to place Boshoff ’s work in a historical context.
But the configurations of the artworks don’t follow a strictly linear path, hinting at the complexities inherent in the evolution of the art movements depicted.
The crème de la crème of Pop Artists are represented with Roy Lichtenstein’s Crak (1964), Warhol’s Joseph Beuys (1980) and, in particular, Tom Wasselman’s Nude (1965). This collection demonstrates the manner in which traditional forms, such as the human body, became stylised, shifting focus from form to the ideas they articulate.
Employing mass-produced objects, a collection of trite touristy postcards of London, Gilbert and George’s The Morning After (1981) continues in the same vein of Pop Art but takes the movement a step further. They employ aspects of mass culture so as to blur the boundary between art and life.
In this artwork clichéd imagery is used to glorify English culture in an effort to undermine it. And just as one can’t imagine Gilbert and George’s unique aesthetic existing without Pop Art, the same could be said for Kendell Geers brand of art. Geers’s practice relies heavily on appropriating common,mass-produced objects. He makes slight alterations that not only elevate these objects to high-art status but in so doing provide commentary on the nature of art and society. The Brick is an ideal example of this. A news story of the deaths of an impoverished family in a fire – attributed to a hot brick they used to heat their humble abode – transforms a run-of-the-mill brick into a profound sociopolitical statement. It’s hard to imagine a single brick causing such devastation. Ultimately it is the environment and conditions in which this brick has been used that have brought about such catastrophe.
The important point that Geers’s work, and that of Alan Alborough and Boshoff, makes in this exhibition is that, contrary to popular assumption, South African conceptual art doesn’t mimic its Western counterpart.Rather, the visual and conceptual idioms have been appropriated so as to articulate concerns that are particular to South Africa. In this way South African art is part of international trends while having personal relevance for locals.

Posted by Mary Corrigall at 10:44 AM No comments: